Coursera addict that I am, I spontaneously signed up to the highly recommended coursera course Creativity, Innovation and Change.

The assignment for the first week is to create a shoe tower. The assignment is thus:
Build the tallest free-standing tower you can make entirely of shoes. Also think aesthetically, how beautiful is your shoe tower? How much art can you add to it (shapes, colors, etc.)? No other materials are allowed besides shoes (i.e., no string, tape, glue, etc.).

The first problem arose: I don’t have that many shoes. And: I live in two places and the shoes are not all in one place. This is my meagre resource: 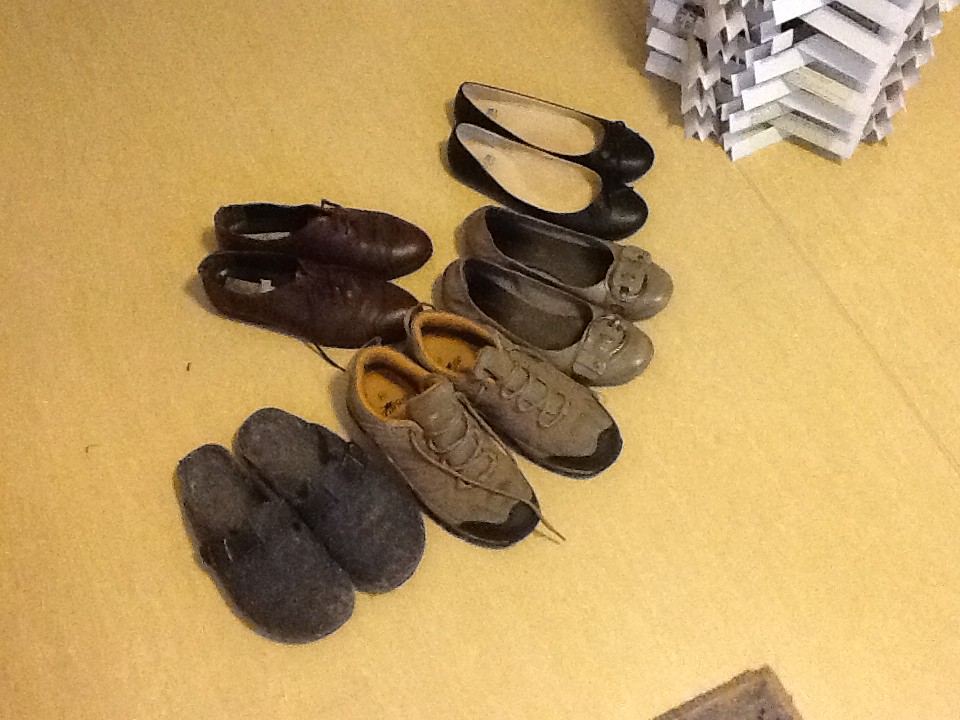 How can I make a tower out of this? Hmmm… Why not add something that is remotely shoe-shaped? I had enough bottles with detergents and shampoo and such, so I tried to use those, together with the shoes. It was a tricky affair, since the shoes are somewhat squishy, and the bottles rather stiff. Constantly hoping that the shampoo would not squirt out of the bottle into my shoes, the construction began. This is the result: 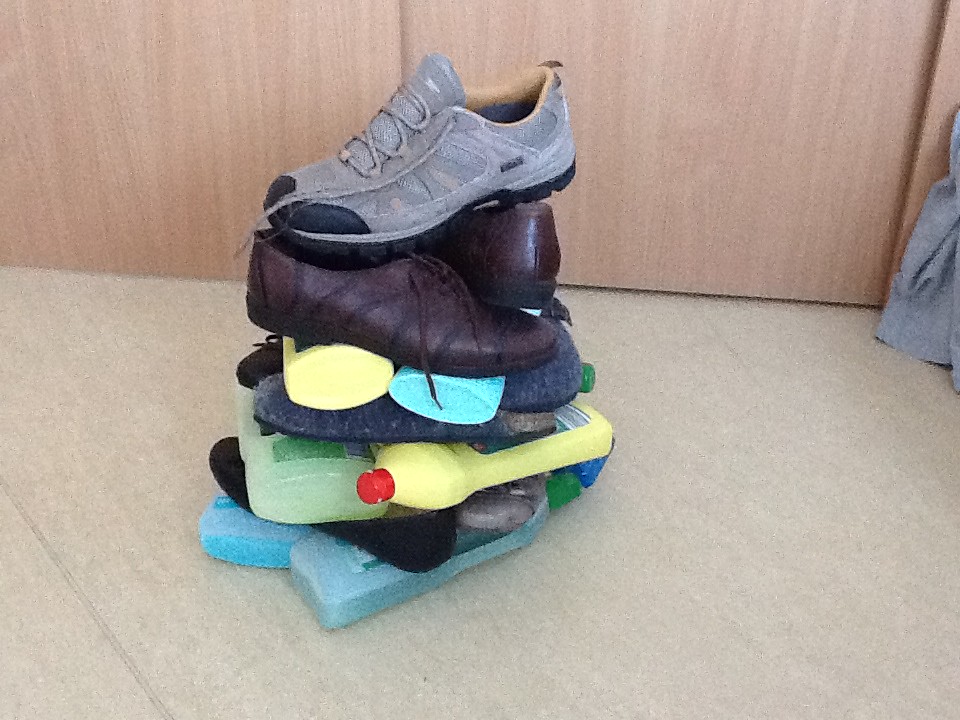 Not bad, I thought, but not very high either.

The next day I lurked on the forums and saw, to my amazement, that other people had similar problems. There I thought I was the only person who didn’t have 100+ shoes in her cupboard. I was wrong. This is a good thing. Anyway, to my horror I realized that we were only allowed shoes, nothing else, and that the thing should be pretty, too. But then a friendly TA claimed that we could use something else, too, instead of shoes, and told us about the paper-towers made by the last course.

I certainly have enough paper. Having played with paper enough in my more or less creative past, I had a vague idea of what I wanted. I started to fold. And fold. After 81 sheets of A4 paper were more or less clumsily folded, construction began. Tada: 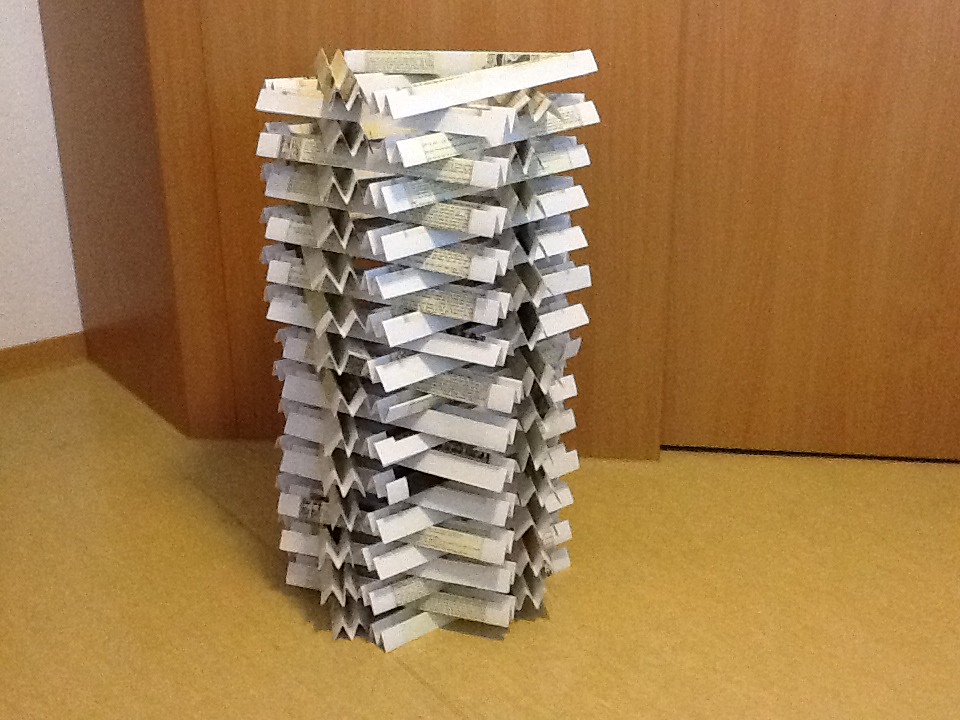 This is about 60 cm high and I think it’s pretty. In any case, it is stable. Using triangles is always a good base. I could even push the tower around without destroying it.

But then I thought: what if the peers haven’t read the TA’s advice and insist on shoes? Back to construction: 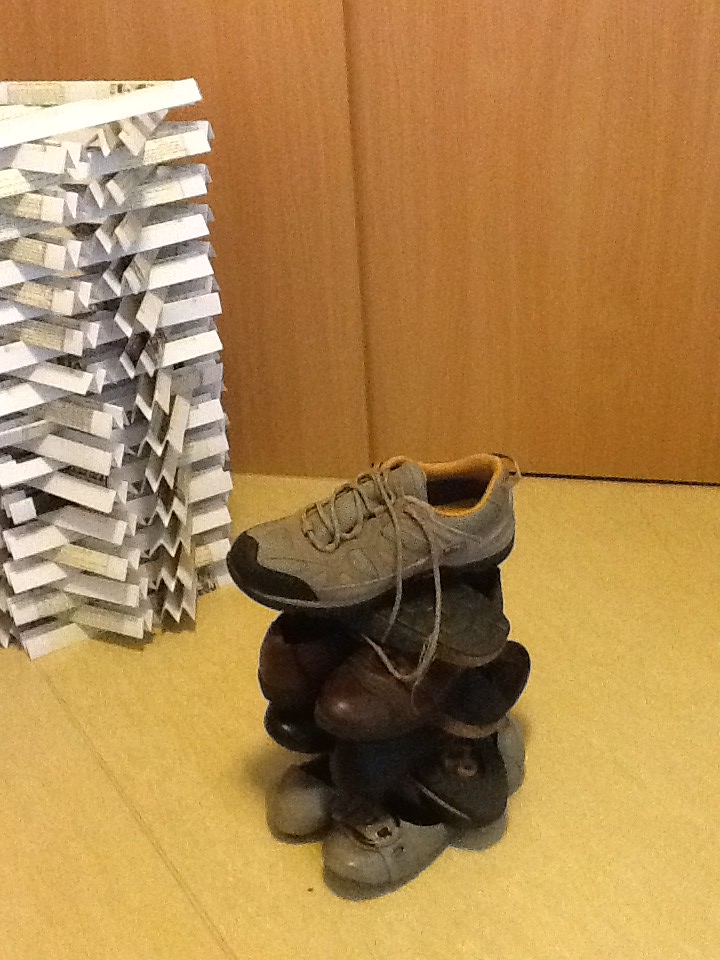 To other shoe towers I’ve seen from peers, this one compares as rather simple and certainly not pretty. But it’s reasonably stable.

I got ambitious – there must be something about towers and heights – and went back to the paper. Foundation of 2, stapled in a square. Uh-oh. Here my clumsiness gets punished. If I were able to fold the paper neat and even, this could be made reasonably stable, too. As it is, I am not neat and the folded paper wasn’t always very symmetrical. While the triangle construct forgives this imperfection, the 2/square doesn’t. And, almost finished, I noticed that my tower started to shift to one side. Like the tower in Pisa… I resisted putting the remaining pieces on top and quickly measured the thing: 93 cm. Then a picture… and as soon as I had taken the picture, this happened: 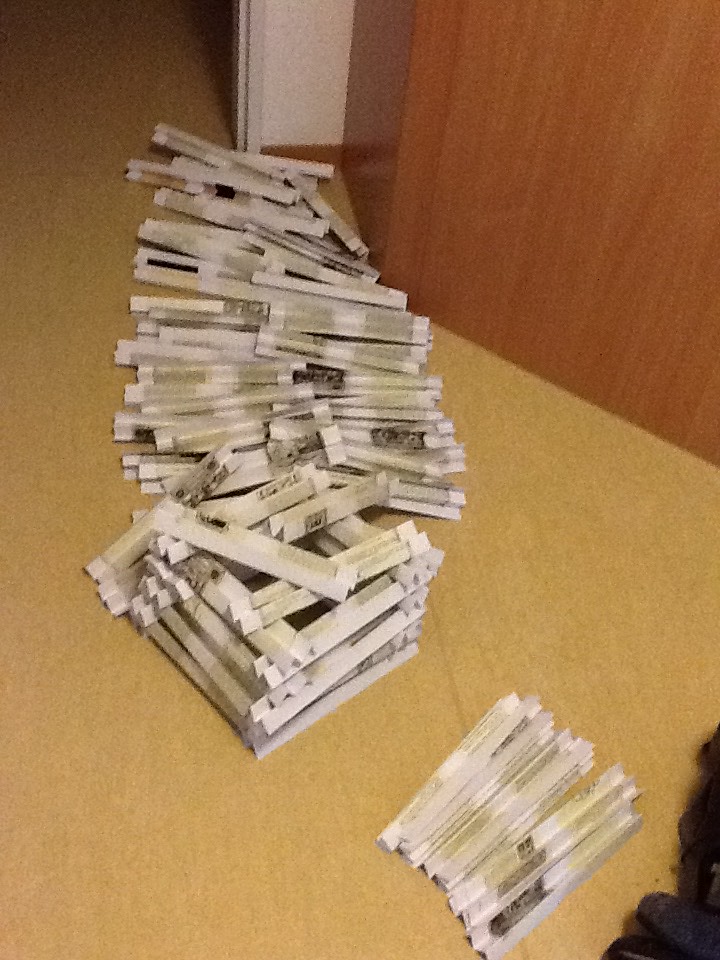 Ah, well. I had a lot of fun. If the course goes on like that, I won’t have time for anything else. How this post became so Freudian, though, I have no idea.

2 thoughts on “The Shoe Tower Project”